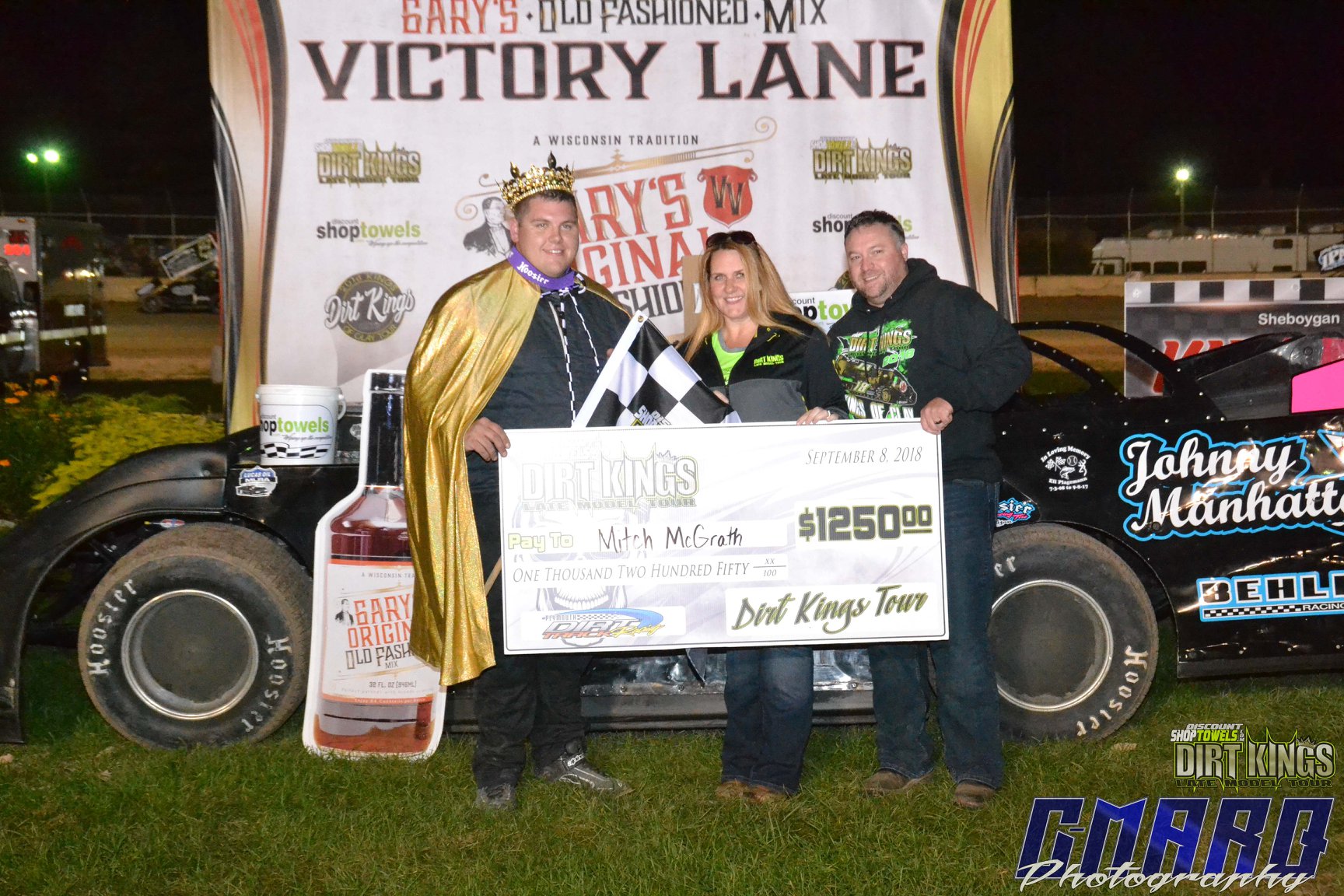 Plymouth, WI - Mitch McGrath returned to the Gary's Old Fashioned Mix Victory Lane, as he led all 30 laps of the DiscountShopTowels.com 30 at Plymouth Dirt Track Racing to win the race and be crowned King. McGrath won his heat race and had the most passing points of the 28 cars on hand, earning him the first re-draw spot for position in the A-Main. McGrath pulled the lowest number, putting him on the pole for the A-Main. McGrath led from the beginning, pulling out ahead of Paul Parker, Brett Swedberg and Troy Springborn at the start. McGrath led the field to the restart on lap 10, when caution slowed the field for the first time for a spin in turn two. On the restart, McGrath pulled away from the field as Swedberg challenged Parker for second. McGrath had nearly a full straightaway lead on the field and was working with lapped traffic just before the red flag flew on lap 18 as Eric Michaels made contact with the tire in turn one and rolled his car, landing right-side up. Michaels was okay and the race resumed.

On the restart, McGrath led the field, only for the yellow to come out again, as Joel Bennett spun in turn three before a lap was completed. As the field returned to green, McGrath pulled away from Parker and Swedberg. Further back in the field, Nick Anvelink raced three wide with fellow Stockbridge Engineering Touring Kings drivers Mark Rose and Jim Schmidt and also with Josh Moesch and Joe Reuter, moving Anvelink to sixth position.

Parker would finish second, followed by Swedberg, Springborn, and Chris Engels in fifth. Anvelink would finish sixth, his lowest finish of the season, with Rose, Moesch, Reuter and Buhler rounding out the top ten.

The DiscountShopTowels.com Dirt Kings Late Model Tour has just two races left in the 2018 Kings of Clay Tour. Saturday, September 15, the Tour visits Wilmot Raceway for the Inaugural Jim "Wildman" Watson Classic. The race will pay $2000 to win, as Allied Resource Recovery is sponsoring the event. The Crowning of the King will conclude the season on Thursday, September 27 at 141 Speedway.