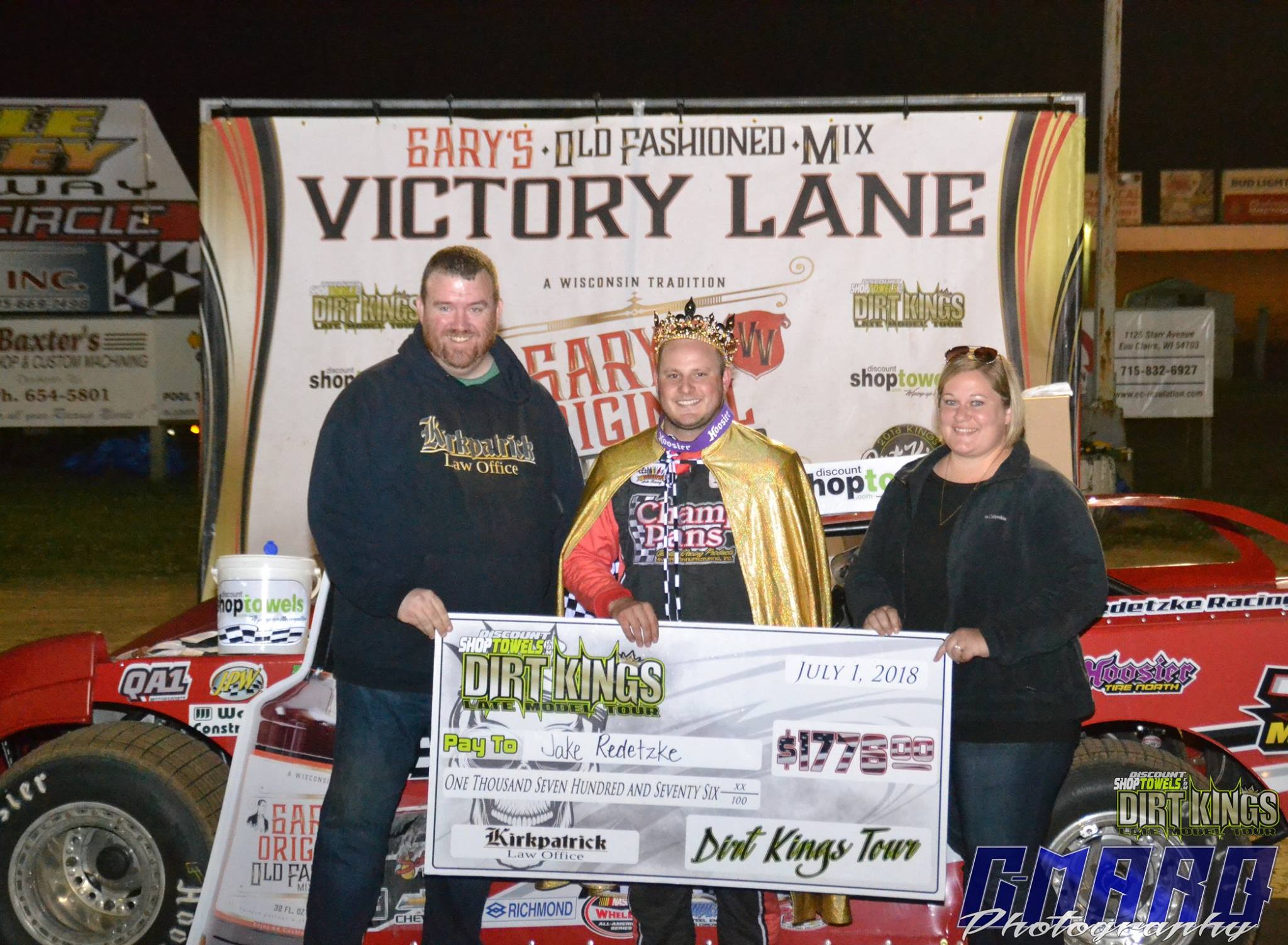 Jake Redetzke started the 30-lap Independence Day Bash presented by Kirkpatrick Law Office from the pole position and led every lap of the race to be crowned King in the Gary’s Old Fashioned Mix Victory Lane. Redetzke made his first DiscountShopTowels.com Dirt Kings Late Model Tour start at Eagle Valley Speedway, joining an elite group of drivers who have been crowned King in their first starts: Mitch McGrath, Jimmy Mars, and AJ Diemel.

Starting from the pole allowed Redetzke to take the early lead with James Giossi as Brett Swedberg battled for third position with Diemel. Caution slowed the field on lap four as Jimmy Mars came to a sudden stop along the cushion in turn four. On the restart, Redetzke battled with Diemel for the lead as Nick Anvelink went three-wide with Swedberg and Giossi to pass for third position on lap eight.

Redetzke started to encounter the back of the field near the halfway point, but caution slowed the field again on lap sixteen for Tim Buhler as his car slowed coming out of turn two. The caution negated the lead that Redetzke had on Diemel and Anvelink and allowed Swedberg and Giossi to close the gap.

Redetzke had a great restart with no one in front of him and he began to stretch out his lead as Anvelink moved outside of Diemel to battle for second. Anvelink shuffled Diemel back to third and Anvelink set his sights on Redetzke, who had pulled out to an eight car length lead. With just four laps to go, Redetzke encountered lapped traffic and Anvelink was closing in. Coming to the white flag, Ron Berna spun in turn four, brining out the caution flag.

Caution flew on the restart as Tom Naeyaert made gentle contact with the wall in turn one. As the green lap flew, Redetzke had a clear track in front of him as Anvelink battled with Diemel for second and Swedberg battled with Giossi for fourth.

Anvelink and Diemel had to settle for second and third, respectively, with Swedberg in fourth and Giossi in fifth. Jared Siefert quietly moved to the front to finish sixth, followed by Jim Schmidt, hard-charging Jesse Glenz finished eighth. Glenz had to race through the B-Main to start eighteenth in the A-Main. John Kaanta finished ninth and Justin Schmidt rounded out the top ten.