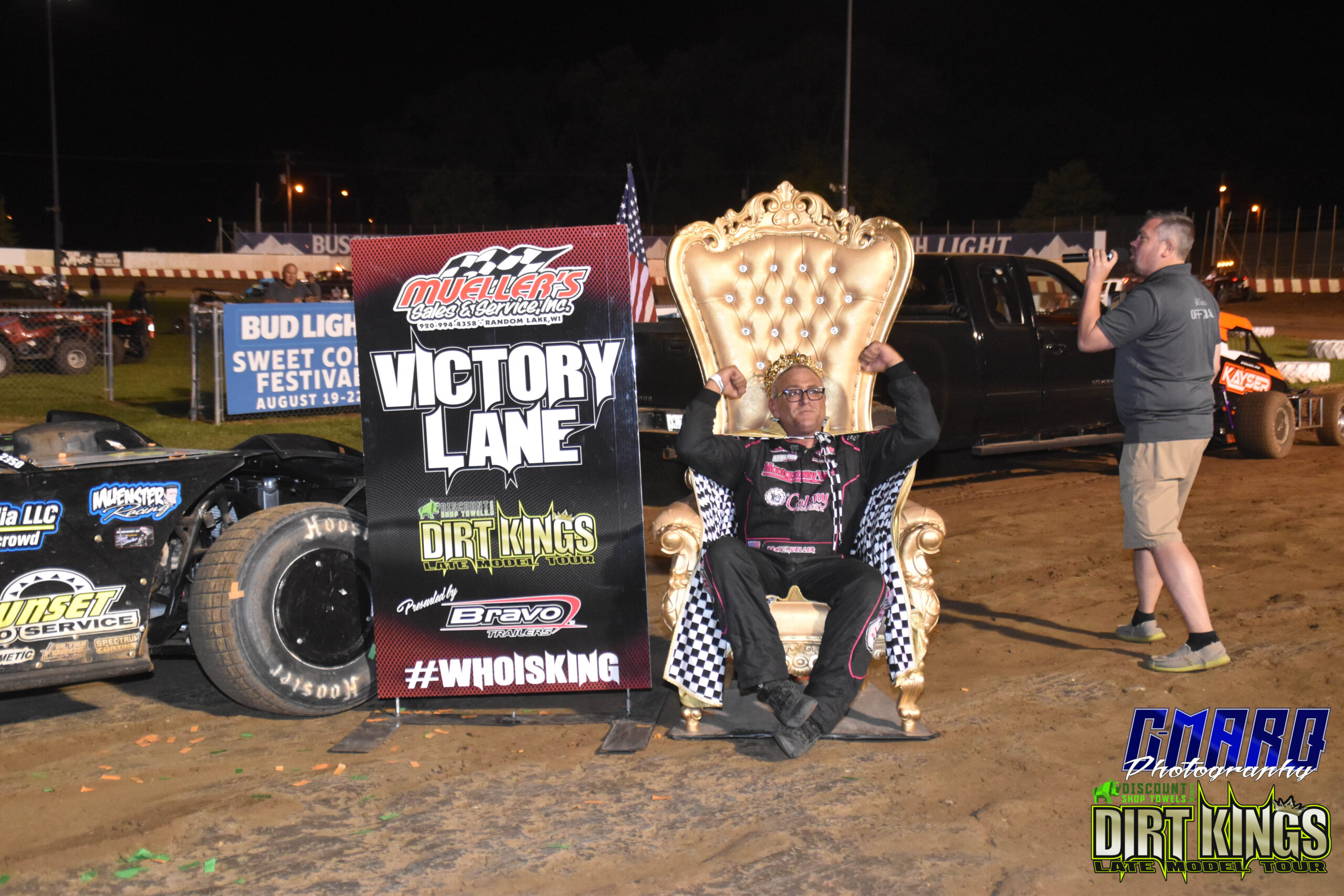 Sun Prairie, WI - Brad Mueller was crowned King of the Park at Angell Park Speedway, earning his second career DiscountShopTowels.com Dirt Kings Late Model Tour victory. Mueller started the 25-lap King of the Park from the pole position, after the re-draw. Mueller and Nick Anvelink led the field to the green flag, racing side-by-side into turn one with Anvelink having the advantage on the outside and taking the lead. Mueller settled into second position as Anvelink started to pull away. Anvelink reached the tail end of the field on lap seven and then began to work through traffic with Mueller, Brett Swedberg and Mitch McGrath closing in. At the halfway point, Anvelink still led the field with Mueller, Swedberg, McGrath and Jayme Zidar rounding out the top five. With great racing all around the track, McGrath moved to second spot as he dove to the inside of Mueller in turn two. Caution flew the next lap with just six laps to go as Turk Letizia and Kyle Raddant spun in turn four.

With just six laps to go, Anvelink led the field to the green flag with ten cars on the lead lap. McGrath moved to the outside of Anvelink as they raced into turn three on the next lap making the pass as they entered the front stretch. Unfortunately, McGrath had a tire going flat and turned into Anvelink. This happened infront of the field and they both spun into turn one, bringing out the caution. Both McGrath and Anvelink were unable to continue with flat tires, ending their nights.

With five laps remaining, Mueller led the field to the green flag with Swedberg, Zidar, Ron Berna and Justin Ritchie rounding out the top five. Mueller ran the inside line while Zidar raced to the outside of Swedberg for position and tried to make it hold when he reached the leader. Mueller held onto the lead with Swedberg behind Mueller and Zidar working the outside. On the white flag, Mueller continued to led the field with Zidar in second. Mueller held on to be crowned King of the Park in Mueller's Sales & Service Victory Lane, while Swedberg passed Zidar for second spot as they raced through turn four. Swedberg finished second, 1.956 seconds behind Mueller. Zidar finished third .007 seconds aheads of Berna at the checkered flag, with Ritchie in fifth.

McGrath had the fastest lap in qualifying, with a 14.242, earning the Champ Pans Fast Qualifier Award. McGrath, Anvelink and Mueller each won their 10-lap heat races and a spot in the re-draw along with Swedberg, Berna and Zidar.